Liv Kristine is rolling the wheel of fortune, with determination, conviction, and dedication.
Liv Kristine remains in the news, and she does it with a new solo work, on this occasion. This solo work will be a record combining both, studio recorded songs and live performed anthems of her career, which will be much celebrated by her fans.
‘Have courage dear heart’ is a title as meaningful as identifying for Liv. We used it as a starting point for a pleasant and entertaining chat, event sentimental at some point… As she has us used to. In this conversation she advances us some interesting things… 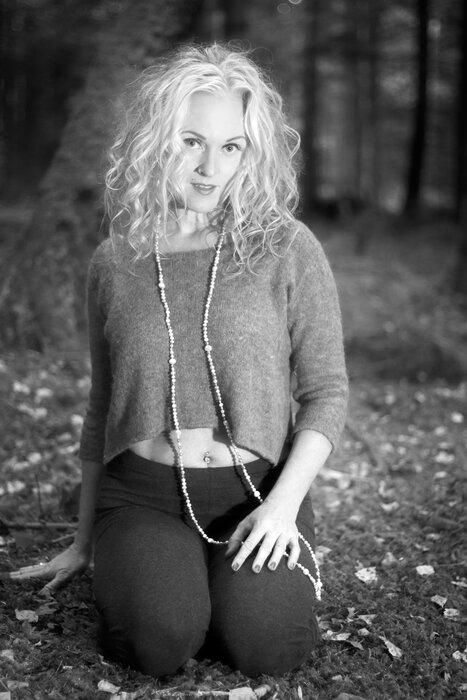 EMPIRE MAGAZINE (EM): 22021 is your busiest year in a very long time, from the musical workload standpoint. How do you feel about it?
LIV KRISTINE (LK): Thankyou, my dear friend, for connecting again so soon. I am filled with such gratitude. This release is something I have dreamt of for so long.
I thank my fans, friends and followers for being so patient. It was Michael who encouraged me to return to my artistic roots, to return to what my heart is so passionate about – music.

EM: It seems to me like this is the very first time your composer pays attention to your real needs. In the sense that, for the very first time, your composer listens to your true voice. Would you agree with me in that statement?
LK: You already found the right words. Yes, that is the frequency around the compositions. It is about having the courage to speak out one’s real truths and values, it’s about being authentic, about sensing the greatness of the universe. Tommy started composing these songs in 2015 and he has given me all the time in the world to progress on them. And my voice has grown so much since then.

EM: I could perceive an unmistakably homogeneous sound through your last four studio recorded songs. Are we aligned on that sense? Did you feel completely free to record, suggest and change the songs?
LK: Yes. I thank you. I thank Tommy (Black Rider Record Studi), Eroc (Eroc’s Mastering Ranch) and Andy (Stage One Studio) for that. There was no communication over the mixes; they just happened like a mutual understanding, a common goal between Norway, Switzerland and Germany. 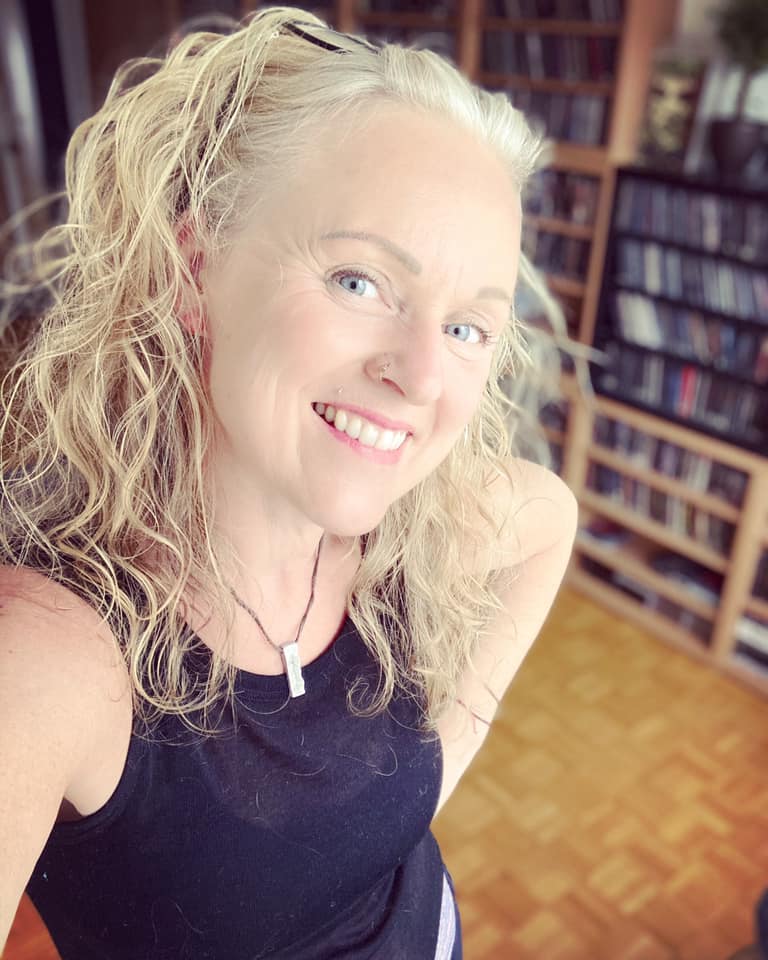 EM:What can you tell us about your professional relationship with Tommy Olson, from the angle of personal and musical compatibility? What happened between you when he left Theatre of Tragedy? And how did you get in touch again?
LK: We totally lost contact after Tommy left the band. I still don’t know why this happened. Then also I had to leave the band. I didn’t even know myself why I had to leave the band. However, as facts came to surface during one of our reuniting meetings in Stavanger, I know today what wasn’t clear to me in 2003, and we dissolved all misunderstandings over a few beers. But that’s another story and I totally understand why and how it happened now. Well, it was Raymond who contacted Tommy during our tour “Liv Kristine” in 2015. I was so happy to hear from him. I visited him in Norway some time later and I just knew we can create something really beautiful together.

EM: ‘Have Courage Dear Heart’ is one of the best album titles ever! Few times the title of an album has expressed much more than this one.
LK: You are so right. I nearly quit singing back in 2016, 2017, when I felt some kind of deep insecurity and a lot of fears. First of all needed I to build up my own and my family’s life again. When Michael “Mikkel” came into my life, he opened up my heart, for love and for having the courage to be who I am, so I could keep walking into the light which has always been my way, to sing with all of my heart, to feel safe again and to show my true colours. All songs are like prayers. This release is a manifestation of my inner voice coming out strong and clear again. “Have Courage Dear Heart” is a message to the universe. I feel privileged sharing my experience and wisdom with other people finding themselves on their personal path to manifest their authenticity. This so often begins with strengthening your inner voice. Karmasonic (www.karmasonic.net) really opened up a new chapter and door in my life. 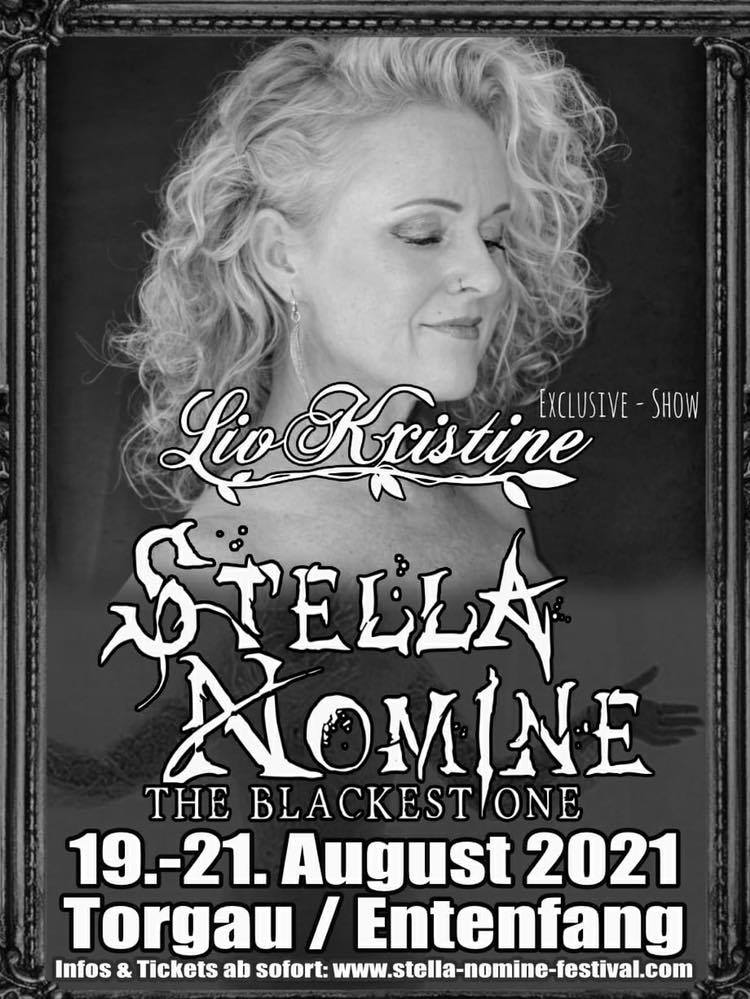 EM: In my opinion ‘Skylight (Cathedral version)’ would be the new ‘The Rarest Flower’. It tastes the same spirit, the same sound, and it is very deep and emotional, as well. How did this version born?
LK: Patrick, who recorded this version, had an idea of playing „Skylight“ live in a piano version. It happened there and then.

EM: Personally speaking, I adore live songs. As we both know, I’ve been asking your tirelessly to record the Nagold shows since forever, as they are always special. So, thank you so much for publishing some live songs finally!!! What was the process you followed to choose the songs?
LK: Chris, our long-time engineer of the legendary Seminarturnhalle in Nagold, Germany, where I’ve been playing my annual show for years, sent me the recordings from 2019 and I just chose with a critical ear. I am very sensitive when it comes to live recordings. It wasn’t easy to choose. 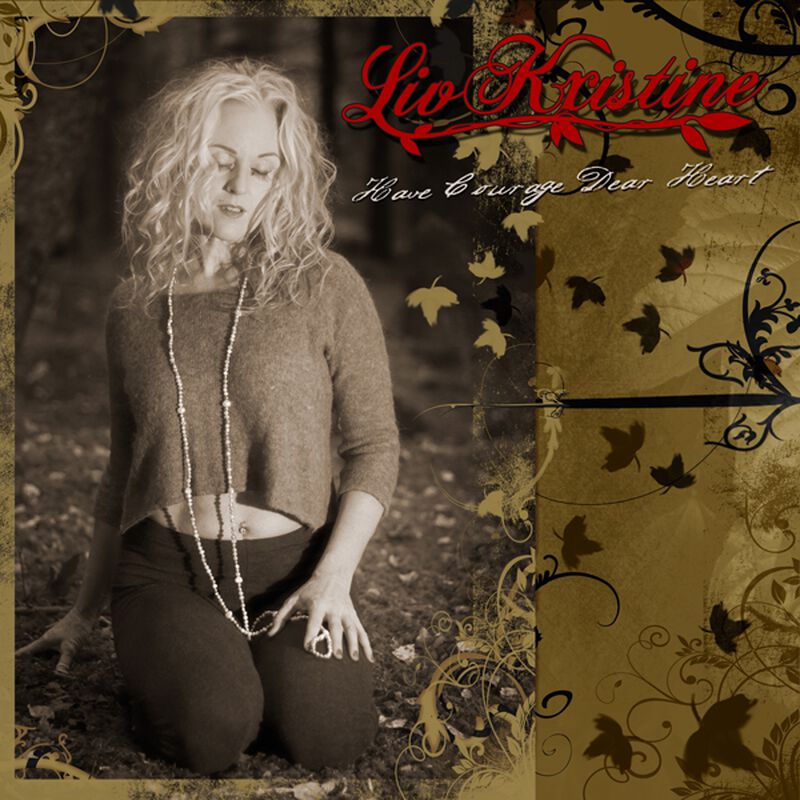 EM: Could you tell our readers the story behind ‘Serenity’? Do you remember any story in relation to the concept of this song?
LK: „Serenity“ had existed in Tommy’s repertoire for a while before I recorded it at this studio during summer 2019. I heard it and loved it. It has such a cool vibe to it and it inspired me to use my voice in a quite different manner than what you normally have heard from me. A really cool experience.

EM: Could you tell us something about the musicians accompanying you in the new songs?
LK: All instruments were recorded by Tommy himself, except for „Skylight Cathedral“ which was recorded by Patrick Winter. 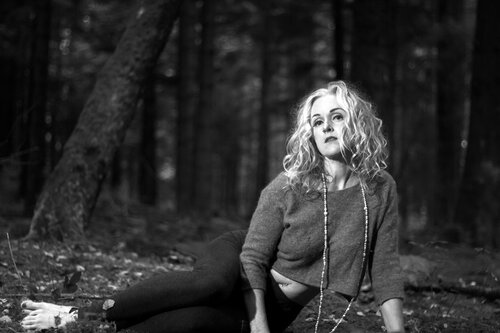 EM: Andy Classen mastered and mixed these live songs at his own Stage One Studio. He is a well-recognized producer. How was your ideas sharing and communication with Andy?
LK: Yes, Andy also recorded my vocals for „Gravity“ and „Have Courage Dear Heart“. Andy and Michael have been close friends for years. We were looking for a studio and Andy was right in the middle of our drive to the north of Germany. I love his place – it’s like litte Asia. It’s very comfortable and quiet and that’s important for me. Working with Andy was like we’d known each other for a long time – so easy, so relaxed and productive.

EM: We have noticed that ‘Skylight’ and ‘Have Courage Dear Heart’ are two EPs (extended plays). We are eager to have a long play of yours in our hands. Do you have a timeline to release a new LP album? What would be the plan?
LK: My full-length album is done 2/3. I couldn’t visit my composer Tommy Olsson in Norway last year and this year due to the situation we are currently in so the circumstances slowed down the whole production. However, we have a good plan. First the EP, then the album, maybe a second single in-between. We have some really fine and interesting guest coming up.

I can tell you exclusively that December 17, 2021 will be my annual Christmas concert in Nagold

EM: There is a concert scheduled for May 15th at Die Halle in Reichenbach. Did you receive a solid confirmation of this concert? Is it really happening? If so, what kind of show can we expect? I read on the Internet information about the show, but not in the official channels.
LK: My next gig is planned for August, every else planned before had to be postponed. Stella Nomen Festival is our first one that is planned for August in Torgau with a special setlist from my early solo albums.

EM: Finally, your show in Nagold’20 was cancelled. What did you feel when you received the news? I think the crew is trying to reschedule cancelled shows. Is there any chance for us to see you twice in Nagold in 2021? For instance, December and new date, in substitution for the one cancelled.
LK: Yes, I have a good feeling about our annual show in December. I really hope to see you, all of you there. It’s such a special event. I am in close contact with the crew and there will be news soon, although I can tell you exclusively that December 17, 2021 will be my annual Christmas concert in Nagold.

EM: We received news that you will be singing at Stella Nomine Festival on August 21st. Is the festival still programmed?
LK: As already mentioned above, yes, we have confirmed and we really hope the festival can take place. 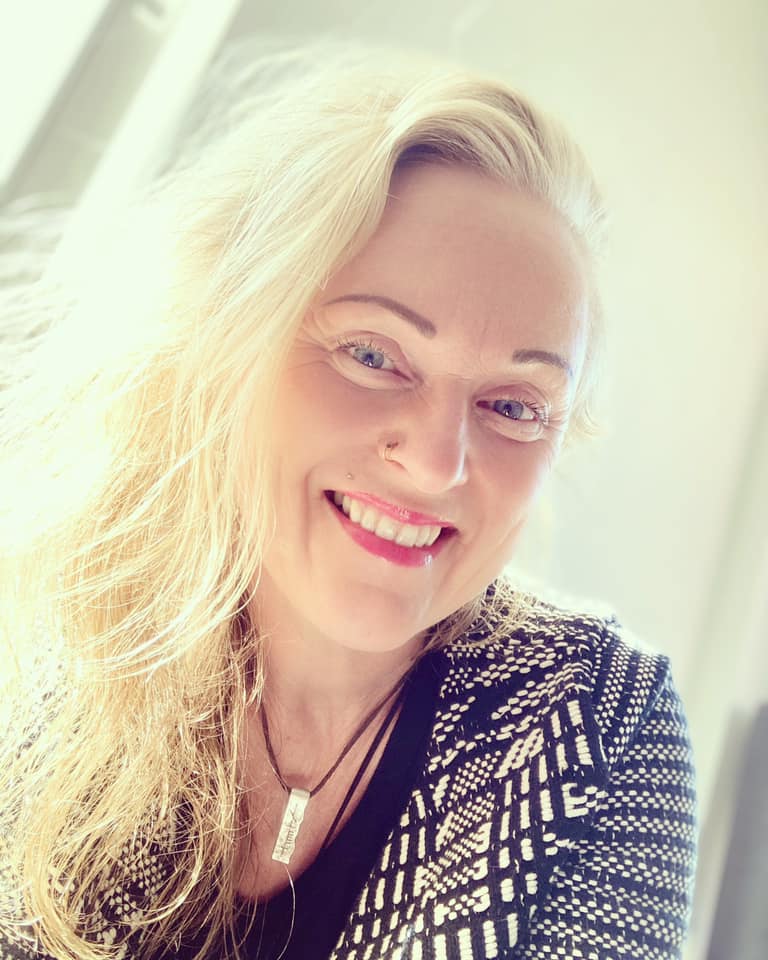 EM: About the Stella Nomine Festival… there will be some musicians you performed with and some bands you know as Das Ich, Johan Hedlund from Tiamat… Will there be any room for guest appearances or collaborations?
LK: So far no. We haven’t met for years. I am looking forward to seeing them again, Bruno Kramp and Johan Edlund.

EM: 2021 marks the 25th anniversary since ‘Velvet darkness they fear’ was released. What memories do you keep from those days?
LK: I really love thinking back on the lightness and freedom around our compositions. We gathered in our free-time and created something special. There was no big pressure, no big money nor people controlling our work, visions and plans. It was such a great and liberating feeling. Very authentic, highly creative. Your question is really nice because this is the frequency for my artistic work now. It just feels like being one, at home and in total alignment with what I am creating. I have wonderful people around me who inspire me, moreover, the best fans in the world who are both really patient and open-minded towards ma releases. 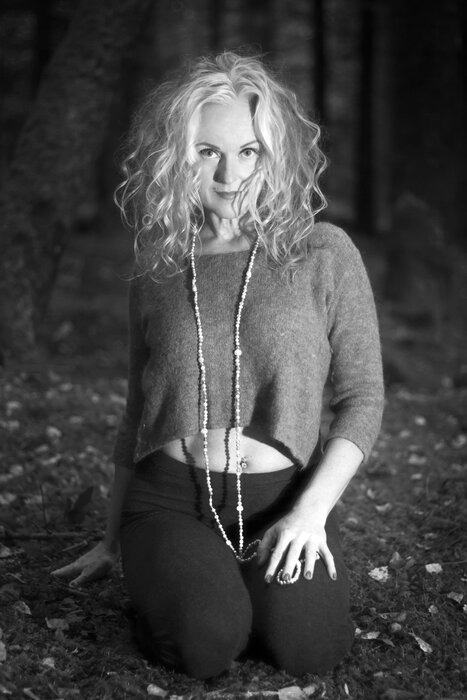 EM: Do you have any plans with Theatre of Tragedy? Maybe a new rehearsal? Is there still not a chance to reunion?
LK: I wish I could answer this question. We haven’t met since 2019 for beers, laughs, long talks and rehearsal. However, Lorenz, Hein and I are in steady contact. 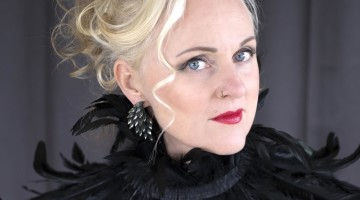 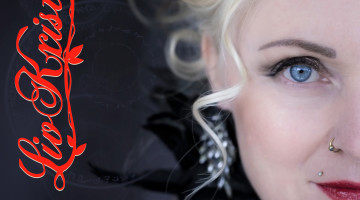